It has taken me quite some time to finish the whole Gossip Girl series, but now that it is over, it is safe to say that it is my favourite show of all time. The fashion, the luxury, the drama, Gossip Girl never failed to impress. The show was absolutely amazing, and I officially decided that Blair Waldorf is my favourite character. Upon completion of this series, I was inspired to write a few things I learned from Blair Waldorf over the past 6 Seasons. Her wisdom and determination were truly enlightening. So here are some of my interpretations of Blair Waldorf’s quotes that I thought were inspiring, interesting, motivational, or simply made sense. I hope you enjoy!

The greatest truth of them all. Just take a look at Holly Golightly from Breakfast at Tiffany’s. There’s a reason she would stroll by Tiffany and Co. every morning. Blair Waldorf obviously felt the same, and knows that retail therapy is a thing. So if she was feeling down, a trip to 5th Ave would cheer her right up. Take a trip to the 5th Ave of your city. In Toronto, that happens to be Bloor Street, which is my go-to place to shop, walk, eat, and just enjoy everything it has to offer.

“Have a little faith, and if that doesn’t work, a lot of mimosas”

Champagne and Orange juice. Is there any better way to start the day?

“We are not servants to our emotions. We can control them, suppress them, stomp them out like bugs”

Our emotions have the power to control our lives. If we let them, that is. Blair Waldorf knows that she is in charge of her life, and she is the one who controls how she feels. I happen to feel the same way. I won’t let negative thoughts turn a good day into a bad one. Simply put them to the side and think of something that makes you happy. 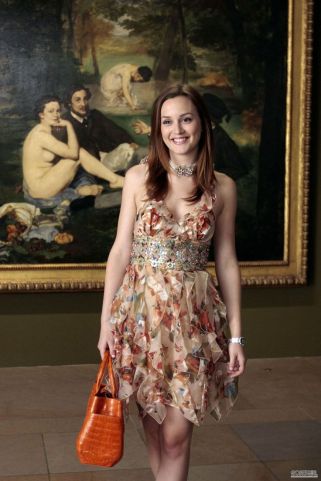 Choosing to settle down with someone is a big step. When you have decided that is what you want,  you have to remember to never settle for anything less than the best. When you do that… who knows… maybe your prince charming really will come.

“If you’re gonna be sad, you might as well be sad in Paris”

For those of you who have walked the streets of Paris, you know exactly what this means. The smell of freshly baked croissants, a warm cafè latte, Chanel stores, macarons, the lively music of the accordion player (yes, they actually do play the accordion around the city)… After all, bad day in Paris is still better than a good day anywhere else.

“If you really want something, you don’t stop for anyone or anything until you get it” …“I know what I want, and i’m gonna get it”

Blair Waldorf’s determination and confidence impressed me from the start of the series to the final episode. She proved to be a successful, capable, and determined young woman, and inspired me to be the same. So don’t ever let anyone stop you from going after what you want. Just keep on moving forwards, and don’t look back.

Every woman should have an affirmation of her own. This was Blair’s affirmation, and in times of stress, it helped keep her focused on what was most important, to stay on track with her goals.

Do you have an affirmation? Comment below and let me know, I would love to know.